Although Freemasonry has always been associated with stonemasons, Craft masonic ceremonies make very few references to the working of stone. The Mark Degree, historically an extension of the Craft's Fellowcraft degree, is explicitly related to stone working and building in stone. It takes its name from the medieval mason's "mark".

Unlike all other medieval trades, the stonemason was a free man. He was not bound to any Lord or Bishop; his employment was effectively piece-work. Each man had his own mark which he carved into every stone he worked, in order to secure payment. Many distinctive marks can be found in the fabric of cathedrals and castles throughout the medieval western world.

The Mark degree ritual is a strong link between "operative" (i.e. real working stone-masons) and "symbolic" masonry. Scottish operative lodge minute books and other surviving documents bear many "marks", which would therefore have been familar to the earliest symbolic masons. Records also show that a form of the Mark Degree was worked as early as 1599.

The Mark ritual uses the symbolism of the keystone of a stone arch to teach a lesson in morality. The Jewel of the Mark Degree is shaped as a such a keystone.

The earliest record of the Degree being worked in a speculative body was in 1759 in Portsmouth. It was thereafter worked in Craft Lodges and Royal Arch Chapters, particularly under the Grand Lodge of York (Antients), who permitted any Masonic degree to be worked in a Craft lodge.

The 1813 articles of the United Grand Lodge of England specified three Craft degrees only (including the Royal Arch), the Mark degree being excluded. Even so, many English lodges continued to work it, some obtaining Scottish warrants from the Bon Accord Chapter. The situation was eventually resolved by the creation of a Mark Grand Lodge in 1856, who agreed a common ritual by 1860.

The Mark Province of Gloucestershire and Herefordshire continues to enjoy cordial relations with the other orders in the area.  Our PGM can be seen here at the 2019 annual cathedral service with the provincial heads of Craft, Royal Arch and Knights Templar. 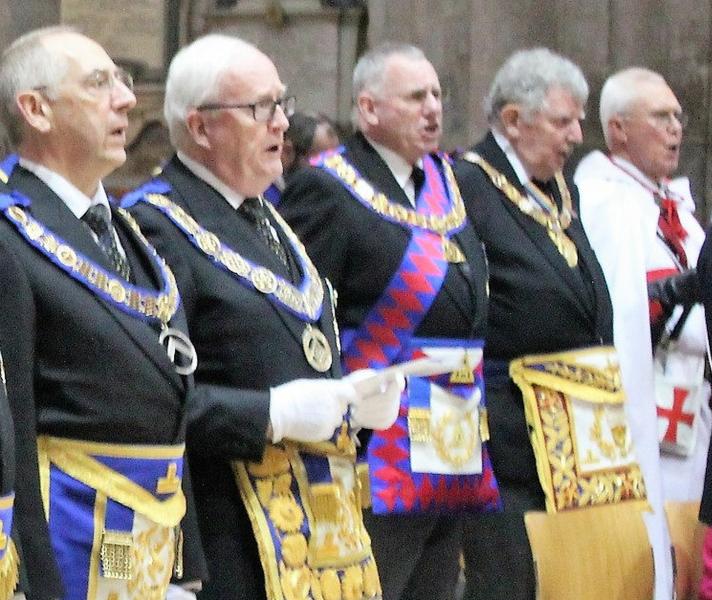