Charitable giving has been at the heart of Freemasonry from time immemorial. This is reflected by the inclusion of the word "Relief" in the traditional objects of Masonry - in former times this word had the same meaning as the modern "Charity". Every newly-admitted Freemason is immediately told that he is expected to exercise Charity, not just to his brethren but to anyone in need of comfort and support.

Freemasonry is a major national charitable donor. Its Grand Charity donations are second only to those of the National Lottery, and Freemasons also support many dedicated charities for the benefit of Freemasons and the general public alike. All funds have been donated by the Mark Masons of England and Wales.

The Mark Mason's Charity is the Mark Benevolent Fund (www.markbenevolence.org.uk), which has worked in parallel with the Grand Charity since 1868. Its benefits are not limited to distressed Mark Masons and their dependents; it has been a significant donor to public charities, particularly those dedicated to the relief of health-related problems. Seven-figure donations for the treatment of prostate cancer and the provision of vehicles to the St. John's Ambulance Service are particularly note-worthy, all funded by the Mark Masons of England Wales.

This Province has its own benevolent charity, funded entirely by the Mark Masons of Gloucestershire and Hereford. Its aim is to provide modest help in the two counties. Some of the support given over the years include:

SARA (www.sara-rescue.org.uk)  is the largest independent lifeboat service in the UK, second only to the R.N.L.I. Its key role is the provision of water-borne and land search emergency services throughout the Severn River basin.
It is entirely dependent upon donated funds, volunteers and voluntary effort. Its three stations, eight operational boats and over 150 personnel provide search, rescue and assistance throughout our Province.
Its efforts were particularly notable during the recent periods of flooding in the two counties, where many rescues of stranded residents were effected. SARA's effort came at a heavy cost, however, which severely depleted its reserves.

The station at Sharpness was in particular need of exapansion. The 100-year-old crane by which lifeboats have been launched had become incapable of lifting the primary boat at Sharpness. A slipway and large boathouse were required urgently if the station was not to close, and available funds were insufficient.

The Mark Master Masons of Gloucestershire and Herefordshire were therefore delighted that the Mark Benevolent Fund could make available £87,000 to enable a new slipway and boathouse to be built, enabling the whole project to proceed. The slipway was ceremonially dedicated and opened at a ceremony where the Mark Assistant Grand Master, Benjamin Addy (pictured left) unveiled a commemorative stone and formally named it "The Keystone Slipway". Lifeboats can now be deployed rapidly without use of a crane whenever an emergency arises.

The Diagnosis of Prostate Cancer 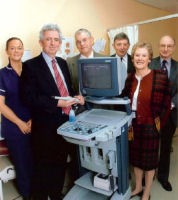 Prostate cancer is the most common male cancer in the UK, accounting for almost a quarter of male cancers. Each year, nearly 35,000 men are diagnosed and more than 10,000 die from the disease. As most cases of prostate cancer occur in men over 50, it is a cause particularly relevant to freemasons!
The Mark Fund of Benevolence has donated two million pounds for the diagnosis and treatment of prostate cancer. Part of that donation has been used to purchase and donate an ultrasound scanner to Gloucestershire Hospital NHS Trust at a cost of £45,000.
It enables the waiting time between an appointment with a Consultant and the subsequent and scan and biopsy to be reduced significantly, so that treatment commences earlier and the chance of successful treatment is significantly improved.
A further £15,000 has been donated by the Province to purchase two additional probes so that the scanner can be used to detect kidney and colon cancer.