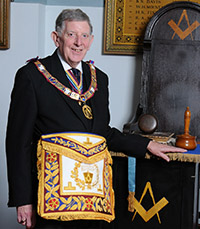 John Gillo was born in the Forest of Dean and brought up in Coleford,  where his family were well-known  and where he was educated (like his parents) at the local Grammar School.  His ancestors were Head Foresters and Freeminers.  His father was Chief Executive of the Local Authority and his grandfather a Lay Reader for 50 years.  John is the first Forester to become Head of a Masonic Order in Gloucestershire.

On leaving school,  John joined Lloyds Bank and started his career at Newent.  Further moves saw him working in Cinderford and NW London before returning to Chepstow.  Moves to Llandrindod Wells and Newnham on Severn followed.  After a spell at Monmouth,  John chose to move to Dursley and became Manager there before moving into a new role covering an area from Fairford to Thornbury.  His final career move was to Lloyds Private Banking in Cheltenham where his area expanded to cover clients across the Three Counties.

Outside the Bank, John was heavily involved with community organisations in the towns where he worked. His other principal interests were Motorsport and Equestrian activities.

During his time at Dursley he met and married Amara,  who was a partner in successful Gifts & Ladies Fashion Shop.  Amara has a daughter and son and they have five grandsons ranging from 7 to 13 living on Bournemouth & Amsterdam.

John has had a long and distinguished Masonic Career since his initiation in 1970,  and has served as: