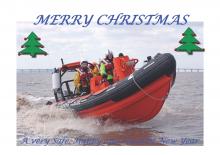 May I take this opportunity to wish Yourself, your Family and all of your Brethren, a very Happy Christmas and a Safe, Happy and Healthy New Year.
I would like to record my sincerest thanks for all of the hard work that you have put in on behalf of the Sharpness Lifeboat and to ask you if you would pass on my sincerest thanks to all of your Masonic Brethren, who along with you and under your esteemed leadership, worked with you to achieve the support you have so freely given. I very much look forward to meeting you in the New Year. 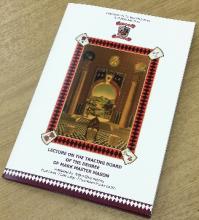 This excellent booklet has been produced by WBro Clive Brooks of Royal Forest of Dean Mark Lodge No 340.  It will prove invaluable to lodges and brethren and will enable them to understand more about Mark Masonry and its symbolism,  and deliver the lecture at meetings if they want,  assisted by an indexed picture of the tracing board. 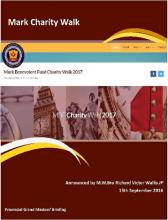 The Most Worshipful Pro Grand Master has announced details of a sponsored walk to be held in May next year in support of the Mark Benevolent Fund – The Mark Charity Walk.  It promises to be an enjoyable family occasion in central London on the 6th May 2017,  and a chance to raise money in support of the work of the MBF while enjoying the sights of central London.

The Provincial Grand Master was delighted to have the support of the Provincial Team,  as well as R.W.Bro. Basil Barke and a retinue of Grand Officers to see Bro. Walter Eley,  the current W.M. of Lodge of Grace No 8566 advanced into Mark Masonry by the W.M.  W.Bro. Wayne Rees and his officers. 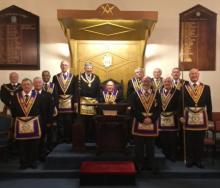 RW Bro John Gillo moves from Treasurer to Senior Warden in the Utrique Fidelis Grand Officers Mark Lodge.   The next meeting will be  Monday May 15th 2017 at Stroud Masonic Hall.  The meeting starts at 11:00am with Ladies and  speaker Geoff Dawe,  Sharpness SARA Commander.  All Grand Officers and Ladies welcome. 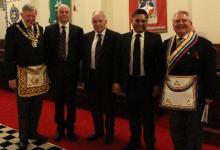 At the invitation of the Worshipful Master & Brethren of Avon Mark Lodge,  the Provincial Grand Master and his Deputy, supported by a number of members of the Provincial Team attended the November meeting of Avon Mark Lodge, where joined by a Fraternal visit from the Portus Abonae Lodge,  the PGM gave a talk on the Mark Lodge,  its history and its layout,  whilst the Deputy PGM suitably dressed in Royal Ark Mariner regalia gave a talk on the Royal Ark Mariner Degree. 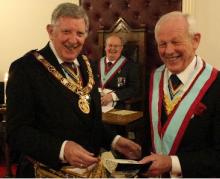 The Provincial Grand Master was delighted to be able to present W.Bro. Jeremy Wake  PGJD, PrRAMGR with his Collarette and Certificate on behalf of the Most Worshipful Grand Master and the President of the Mark Benevolent Fund, on achieving the qualifying honorific status for this prestigious collarette.

Last evening St Ethelbert RAM Lodge determined that instead of accumulating monies in its own Charity Bank Account and with the Provincial Benevolent Fund they should disburse sums to worthy Charitable causes. 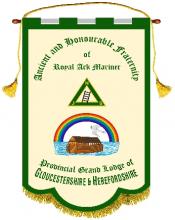 The Provincial Executive agreed for the purchase of a Provincial Royal Ark Mariner Banner, as has become customary in most Mark Provinces in recent years. The design was approved by Mark Masons Hall, and produced by a supplier in India.

The Banner was collected by W.Bro.Michael Holland when in Mumbai earlier this month, and since its order an anonymous benefactor in the Province has kindly agreed to meet its cost.

The Banner, with suitable poles, is currently being made, and will be Dedicated at Tewkesbury Abbey Royal Ark Mariner Lodge on March 2nd 2017.